The Godfather and the Godchildren

This past weekend I got a new nickname. :) Not quite sure what to do with it other than appreciate that I got it from some young guys who meant it as a show of respect for my tag skills and that made me feel pretty good.

To be honest, I'm having difficulty being enthused about the local Force center right now, so I only peeked my head in just long enough to drop off a check for one of the other members (supporting scholarships is always worthwhile and this was a donation deliberately in lieu of playing at a special practice night) and I looked around thinking "...sigh." I probably don't need to elaborate any further on that. Then I headed off to play in the Zone arena across town and had the BEST time with the group who came out for the AYCP.

It began with a solid group of players and me playing with some fired up intensity right out of the gate. One of them shouted at me from across the arena "how high is your accuracy?" and I had to smile when Nate (the game master) replied for me shouting back "pretty high". But I look at that first game as a warm up when compared with the rest of the night. Things took a more serious turn when "Danny" (I don't know his real name, but his hair reminded me of NKOTB so we'll call him that for now) showed up with his posse of players (so let's call them the NKOTB) who say they play at the Force center, but I didn't recognize any of them. Anyhow, Danny was apparently the only one of the group who had played any other kind of laser tag at all so he came in ready to "teach" them and "school" the rest of us...I love that. He was my challenge. And I give the guy props, he was good. But I felt the "Bhodi Li" in me and gave it back just as good as I got and by the end of the first game he seemed to recognize that I had some skills of my own. Not sure if he intended this as a backhanded compliment, but before the next game he said to me "wow, you ACTUALLY made me take my jacket off" ...like he didn't expect to have to work for it at all, let alone break a sweat playing against me. I nodded and asked where else they played and that's when he mentioned the other center (I nodded without adding anything to that) and some mobile tactical. But he was still giving off the rooster vibe, which I decided to just accept as my challenge mark for the night. Meanwhile, the other players who had been there earlier seemed to be taking note. Another game in they had noticed that I was the top scoring player of every game so far. That was when they gave me my new nickname. For the rest of the night they called me...The Godfather.

Now, I didn't go looking for this (and clearly none of these teenagers had actually seen the movie), but I have to say it was a little bit flattering. They went way overboard for the rest of the night saying things like "Godfather, we will follow your commands" and "nobody beats the Godfather". For the remainder of the games they were following my lead, always ending up on my team and one of them actually knelt down and bowed at my feet (does he think Godfather = priest?). I know they were just being silly and making it way over the top...but seriously, how often does a group of teenage minions decide that you are "all that" and follow you around all night? I called them "my Godchildren" ...which probably lets you know that I've not bothered to watch the movie either! :) 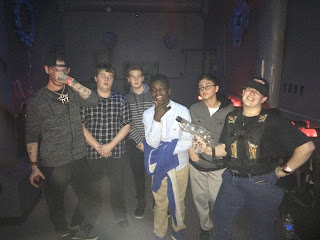 So all night my Godchildren and I pretty much played team to team against the NKOTB (now that's a weird sentence for anyone who grew up in the 90s) and each game I now felt I had a duty to play hard enough to keep the top score each time (don't want to let the Godchildren down). And yes, I played a perfect night. Sometimes playing tag can really be quite a high and I had a great time focusing my energy and attention on just enjoying the game and enjoying the competition. Occasionally it's good to have a night that's a reminder that I choose to play for fun and not for drama. And that's why right now I am making the decision to play where I do.