After a long weekend on the opposite end of the state I was driving back towards Syracuse watching the clock the whole time as I knew I’d be cutting it very close to arrive in time for the start of our league finals. At the end of six weeks of playing (every other week) we were in second place by points standings so we would not be playing until the second game. I figured that at least would buy me a couple extra minutes of cushion time to ger there. When I walked in the door I was met by several people telling me I was in a three-way tie for the sportsmanship award along with my teammate Axman and also Ragnar, so we had to revote to break the tie right before I was called into the captain’s meeting to iron out the final rules and details before we started. Barely a minute to get settled before things got underway!


As we have played a variety of game formats over the course of the league the formats were all placed on a wheel to be spun before each round to randomly determine the format that would be played for each game in finals. As the second place team going in we got to watch the first game as our major competition THP went up against teams Psychopaths and Rainbow Six in my favorite game format, Photon emulation. Whichever team came in third would take a spot against us in the next game.


Watching this game from the sidelines was actually a nail-biter because, even though the odds favored THP to win, for a solid half of that game they were trailing in third place. I actually worried that they were going to lose and we were going to have to start the night playing against them right off the bat! But they had a remarkable turnaround and took the lead in the second half, finishing strong in first. Rainbow six was second that round and Psychopaths moved into the next game against us and team Oof.


Our format for the second game was Gladiator. This had been a good format for us previously and we had a nearly clean sweep with it on the first night of league play, so we went in optimistically and came out in first. Unfortunately for the Psychopaths they took their second third place spot that game meaning they were eliminated early on in the night.


The third game pitted the second place teams against each other in Photon emulation and it looked like Rainbow Six was going to take this round, but in the final 15 seconds of the game the score and team placement flip-flopped at least six times! That was a really exciting finish and as it turned out Oof got the win in the very final seconds!


The fourth game was Z-Game and to be honest, we really thought we were going to take this round…and then we didn’t. Second place that round. Not everyone was chill about the outcome, but there is absolutely no sense in playing the blame game. It didn’t knock us out of anything and was not the end of the world or the tournament. Mental reset…next game.


We were now up again for the fifth game, which was our best format, Gladiator. We took first place this time which meant moving into the final round.


The final game format was Masters and we were up against teams THP and Oof. This round was a bizarre mind game. We played our hardest, but I don’t know if any of us thought we were actually going to beat THP. After all, they had been the one team consistently killing it every week. This was just one of those “give it your all and pray for a miracle” kind of rounds where you have to leave it all in the arena. We came, we saw, we hit it with a laser…and we gave it everything we had left. As we made our way back to the vesting room I heard the speakers on my pack say “…and your team came first”, but I didn’t believe it until I walked out to the lobby and actually saw it on the scoreboard. OMG, we won! 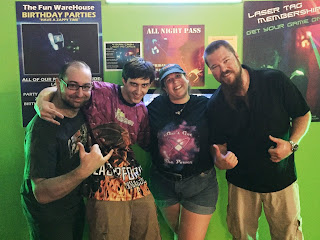 Next it was time for some pizza and awards. There were a lot of accomplishments recognized for each of the various formats from the past six weeks.


Accuracy awards are as follows: 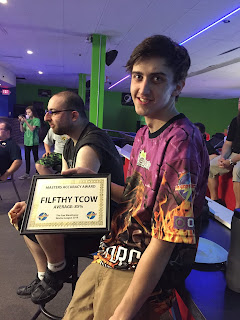 
Then there were high scores by format. I took the high score for Photon with 1192…which for the record I never even get close to on the few occasions I get to play actual Photon!


Other high scores by format are as follows:


And top average awards were as follows: 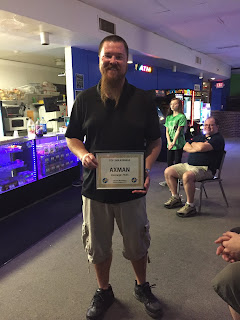 The player voted awards were as follows:


And once the tie was broken Sportsmanship – Ragnar


And to close the night out our team was presented with our trophies for being the league champions. 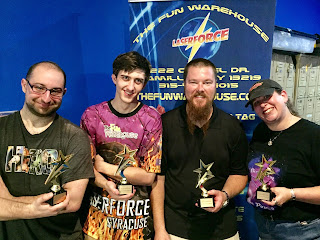 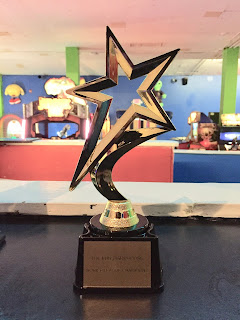 It was a good night for Game of Groans and I want to extend big thanks to my teammates T-Cow, Axman and Saiyan Prince (as well as to Slayer who had been our sub for the last couple of weeks). Also congratulations to all the players involved and thanks to Beanz for organizing this league. It was a great time from start to finish!