And that means that weekend laser tag around here is drying up like a desert. Sheesh! I went out on Friday to the Zone arena...nobody. So I just said I'd be back tomorrow and headed off to the Force arena...nobody. Sigh. Although I did smile and think it was worth the trip just to see that they FINALLY updated the top ten player list (it has not been updated since at least November and that's the point where I actually took notice, so it may have been a lot longer than that for all I know). 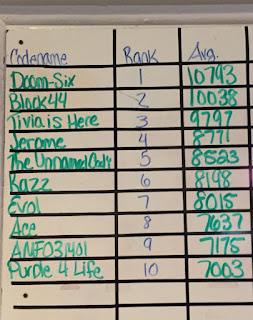 So I went home and figured I'd try again on Saturday. Went back the next day and met up with Razz and Ace in the parking lot, so I figured we were off to a better start...until we got inside and realized we were the only ones! We did play a couple of rounds. Solo play with those two is still decent practice, but they left shortly thereafter so I hung around for a little while, but nobody else showed. Sigh. Messaged Beanz to see if anyone was at the Force center. He told me there were 15 players plus a private group of about 30...perfect! I said I'd be right on over. No sooner did I get there then the group of players decided they were going to call it a night and the private group had just ordered food, so who knows when they'd want to go back in. Well, this was just not my night. So I decided that laser tag was just not meant to be. Between festivals, graduation parties and just really nice summer weather I can tell this is the start of a quiet summer and I may have to be creative in how and when I coordinate some worthwhile laser tag in the next couple of months. No worries...I've already got a plan. :)

So, I am playing tag the other night and it's me against a group of pretty confident high school guys. They are so overly confident that they are chatting about how they won't have a "real game" until some others show up. I am sitting in a corner of the briefing room on my own just observing. Two games in a row those guys split into two teams, not paying me any notice, but leaving me as the solo player on the green team. The new game master, Nate, says to me "I like your odds." So do I.

They quickly pooled their efforts and it was as if I was playing by myself against one large team. I love that! I had another undefeated night and that was pretty much a snapshot of how the whole evening went.

Later on I started gravitating towards the teams with less or newer players. I ended the night playing on the blue team alongside the game master and a couple of less experienced players. Anybody who plays there regularly knows that the blue packs are definitely the least consistent. There are only about two packs I generally choose to use from that color because I feel that most of them are inferior packs.  So that made this comment shouted by a player on an opposing team all the more humorous…

"We should switch to the blue team. They have the better phasers." Ha! If they only knew…and that's why I never blame a pack if I have weak performance, but I also refuse to credit a pack for my good performance.

Towards the end of the night I had a really nice chat with the game master's girlfriend. She asked me how I became good at laser tag and we talked about how I practice a lot and also occasionally travel to play in other states. She told me that she had moved here from Arizona and suggested that if ever I get the chance I might want to play at Stratum in Mesa, AZ, which she believed to be the largest laser tag arena in the US. I'm not certain if this is so (but a 13,000 square foot arena sure sounds impressive regardless), but I have relatives in AZ so maybe someday I'll get here...

Although, according to their website (via a quick Google search) it seems that this place in Missouri may actually be the largest laser tag arena in the world...

Now, this place I may actually be able to get to sooner. I have a YOLO project for this summer. My goal is to eventually play laser tag in all 50 states. I have already played in these eight states and Canada... 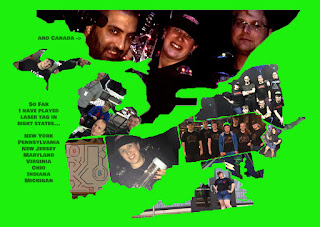 However, I plan to bring that tally up to 20 states by the end of summer, so if I can manage to get over to St. Louis then that number (and an awesome arena experience) may well be in my sights in the near future. Let's do it!!!