I'd like to thank Beathan Miller (aka Lord Beathan) for taking the time to do an interview with me to discuss the early days of Photon and his time as manager of the flagship Photon center in Dallas, TX.

This interview is one of several new features on the website including scripts and vintage collectibles with some other exciting new additions still to come, all intended to help preserve the nostalgia and love of Photon. Check it out at photonforever.com.

Tagging with the Recruits

It may seem like February is too late to make a New Year's resolution, but since our Ascendance team has collectively agreed that Armageddon is not in the cards for us to play as a team this year I have decided to instead focus on another goal...playing laser tag in even more states on my way towards getting to all 50 (I'm at 20 so far) and visiting my 100th laser tag arena before the end of summer. I think this is very likely to happen sooner rather than later. I spent yesterday visiting my 76th laser tag center as I traveled to Ithaca to check out Barski's Xtreme Lazer Tag.

This is a small facility operating with Lazer Runner inside of a mall in a college town. I chatted with the owner, Dave, who told me that while weekend days are usually booked with parties, the clientele in the evenings is predominantly college students. And as it turned out this happened to be the Cornell University recruitment weekend so I was there in perfect time to join in with a group of college students and potential recruits who showed up to play. 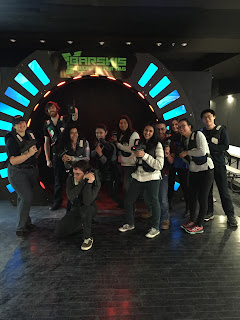 I played several games with this group, both team games and free for all. It was fairly typical for Runner. Vesting was done in the outer lobby and upon activation you could enter the game space by passing through a standard arch with the center's logo at the top. Once inside I found myself meandering past the painted basic black walls that make up the maze area as I worked my way to the far wall where there was one gem target. I took a quick walk around the perimeter to get familiar with it and then just adopted a sweet spot in one alcove where I had some good sight lines to the other players and also to the base. There was a raised ledge against the side wall and a pillar in a least one corner that suggested that some of the structure had already been here and the arena might have been built around it. As my foot hit the ledge I realized that this space was very reminiscent of the experience I had in Ohio playing LaserTrek in an arena that had been built inside a former DEB clothing store. When I mentioned that to Dave he told me that this location was formerly an Abercrombie! So this may give some perspective to the size and design.

This is the kind of center that I think is probably best suited to casual mall patrons looking for a few minutes of interesting diversion to break up the day or to the kids and students it seems to cater to. It's been open for about three years now. I am glad I stumbled upon it as it did not appear on any of the partial site lists I follow, but everyone I saw there seemed to really enjoy themselves and their experience. And I really appreciate whenever I visit a center where the owner is right there taking care of the customers. Thank you for an enjoyable visit and as for those potential Cornell University recruits...I think you should admit every one of them as they were great to tag with. Best of luck to them all!