There was a really low key atmosphere last night... REALLY low key. I brought my coworker Spencer to tag to learn the ropes in preparation to sub on our league team. He did well. Although the competition was limited to the handful of people who showed up on this incredibly quiet night, that might have been for the best for learning the system. 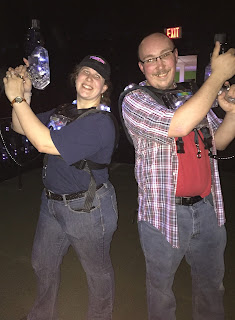 A younger player who is clearly on fire for tag was playing as well. At one point when we crossed paths he shouted "Get her! Get her! Not me!" I teased him that this was a warrior battle call I was unfamiliar with. :) However, I was heartened by his enthusiasm. He is gaining skill and proud of his level five accomplishment and was a good reminder of what tag here could be like when it isn't all about...other stuff. I remember the feeling of ascendance (yes, pun intended) that I had not too long ago and somewhere along the lines that has started to slip. But playing, not to be competitive, but just to enjoy the game with some new blood was really nice and made it worth sticking around.