Last night was the Partners Tournament in Syracuse and it made for a really good night of tag. I think competition can be a really healthy way of making people step it up...even though in Syracuse it seems that simply showing up is half the battle! 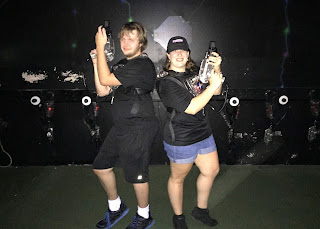 Razz and I were the first team partnered up about a month ago, so we were solid going in. In typical fashion some of the other teams were forming at the last minute, but that didn't negate the quality of the performance they brought. I was glad there was decent competition. I was also glad that we were keeping the lead as we pulled first place all the way through the preliminary games. Three teams of two players each went in each round. Out of five prelims that we played we came in first four times and second only once. It was enough to keep us in first as the top seeded team going into finals. It was also a good ego boost to earn some respect for that as one of the other teams commented that they really underestimated us. Smile at that. :)

The finals came down to one game played among the top three teams. Going in as the top seed we opted to play green knowing that the next team was likely to pick red to keep the final team on blue for the main purpose of keeping them from cycling on center. Frankly I think this game simply boiled down to stamina. Cody was as "hyper" as ever (that's a joke...go back in this blog and during my first tourney before I knew people's names I nicknamed the players of one team Tall, Hyper and Crankypants) so he was an energy force to be reckoned with. Honestly I didn't feel like I was seeing enough of the other players in the arena to pull enough hits for the points we needed. I know Razz felt like he ran out of steam mid-round too, so it wasn't our best game of the night. Really, that's the kicker since we had been so "on" for the whole night up until that point. So we ended up taking second place in the finals in what turned out to be a very last moment turnover for that spot. Congrats to Ass and Nate for taking first. Meanwhile, the fight for second was close and came down to this...

Two shots in the final seconds of the game are what determined our placement in this tournament. I got one last blaze of glory shot off on Cody. Then his partner inadvertently shot him as well! Those two shots flipped the placement between second and third making this a really close game in that respect. 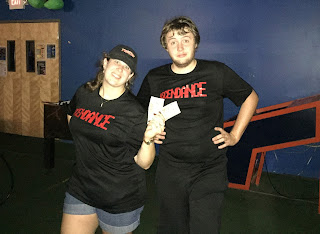 Well, second place is still a respectable standing and again, I congratulate the winners and all the other teams we played against. And it was a cash tournament so we basically covered our investment while having a good time, so it's all good!