Last weekend I was playing out in Syracuse and I wore this shirt. 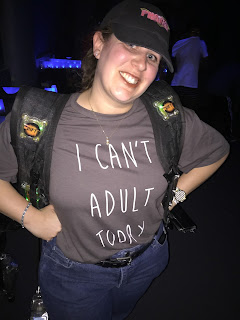 It just seemed very appropriate to the vibe of the night. And I wrote a bit (that I never actually posted) about the evening including the return of the godchildren (when out of the blue I hear someone yell "hey, godfather" at me I knew I had a  team of teenage minions following my lead again and I must say I do think that's kind of cool). Last week there was a packed house of 41 players every available vest was accounted for. However, this week I headed out to Albany and it was a little quieter, but the sentiment of the shirt might have been equally appropriate. There were only a handful of players and it was difficult to find a reasonable balance, although I swear I tried in the beginning. When I showed up and there was nobody except this guy with his young nephew I didn't want to scare anyone off so I played quite mildly, teaming up with the kid and helping to point out where he could get the extra base and gem points while putting only moderate attention on aiming at our opponent. Later on a couple more people joined so I felt at liberty to take it up a notch, but still "playing nicely".

Now, here is where I throw some kudos to the game master, Dominick. While I interpreted it as "playing nicely" and can't account for how my teammates played (the young boy and another girl who showed up with a guy who played on the other team) apparently from the outside it still looked like a slaughter on those two guys. Dominick donned a vest and joined the game to try to even the match a bit and I really respect and appreciate that...and not just because it gave me someone to target harder without feeling badly about it.

Awhile back I wrote a post here about how I encourage staff stepping up when there is nobody around to play a proper game. Actually, at the time it was more a criticism of a situation where no staff were willing to step up at all. But in this case I want to acknowledge what a help it was to the opposite team and make the game significantly more interesting to play (at least from my vantage point) when he did enter the game. I also appreciated it because sometimes I feel like in spite of my genuine efforts, I literally am not capable of adulting to fully take it down far enough to really be right...the first game I could handle just being a coach, but by the last game I needed to play! Sure, I will keep from going total try-hard on a situation and I do always try to help players get their bases if I can. However, I also want to enjoy the best possible game too and I appreciate that this was made possible by the end...even though I clearly can't adult today either!