Seriously Syracuse? (aka A Few Suggestions)


I am frustrated...again. There was supposed to be a local tag tournament going on in Syracuse tonight, but with only a couple of hours notice the tournament was cancelled...again. A rescheduled date has not yet been announced. To which I have to say "Seriously Syracuse?"

Several of us were tagging last night, recruiting players and preparing for the event. And a couple of us were comparing our stamp cards too. Please tell me, how does someone actually complete this card if the site does not host a local tournament and has not since long before the cards became available? 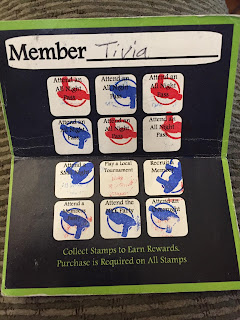 I really try to keep this blog positive, so rather than lament that this seems to be a trend (so much so that in my office we refer to it as "pulling a Syracuse") I am going to offer some constructive criticism to this and other sites that may be having trouble with tournaments and event follow through.

1. If you announce it, you must then actively promote it. It is not enough to put a single post on FB or to just hang a poster on the wall. If employees aren't chatting about your event with every customer who walks in the door during the weeks prior, that is a lost opportunity. If you are announcing games on a P.A. system you should definitely make an occasional announcement about your tournament too. And game masters should be encouraging membership and involvement with all activities. This is how you start to turn a casual player into someone who takes interest in your site and your events.

2. Commitment is the key. This is a two-parter. I assume once an event is announced that most sites would commit to scheduling staff to be there...but if not, consider that part one. The second part is getting customer commitments in advance. Until someone plunks their money down you do not have a confirmed player. If you require a certain number of people in order to make the event run then let that be known and put a hard deadline to when that number must be reached. Secure it with a deposit. Once you have your minimum number of players you can grow the event if needed. But if by chance you don't meet your number by the deadline, cancel with enough notice that you don't waste everyone's time. Don't let walk-ins determine whether or not it's a go. (Personal note - This is especially important if you've gotten any indication that a player may be traveling to attend your event.)


3. Make it matter. I've heard that sometimes tournaments get less attention because they are not as lucrative as overnights or birthday parties. I agree, of course they are not! Tournaments play to a specific segment of your clientele...an important segment, but a smaller piece of the pie nonetheless. One that might have room to grow. But do you know what is less lucrative than a tournament? A tournament that doesn't actually happen. So (I say this cautiously) if you really don't want to build competition at your site then don't bother running a tournament. BUT if you DO want to foster a competitive scene (whether to generate new members, keep members coming back or prepare for the possibility of building a team to travel to other tournaments) then you must make these things matter. You have to encourage people, reward them for even the small achievements and show them that they too can be part of something awesome. This means follow through and making the event a priority too. Adjust the format if necessary, but do NOT cancel unless there is absolutely no other option. Also, I suggest offering small prizes to keep people interested and feeling appreciated so they don't feel like only the top players walk away with something. I'm not advocating for "participation trophies" (accomplishments are earned, not automatic), but I do think that there are little things that can make players feel like the event and what they accomplished at the event was worth their effort. Even cheap plastic trophies or a free slushee are the kind of thing that make people feel like they achieved something. (Side note...I actually saw someone showing off a Negative 24K award from a recent event...proves that ANYTHING can be acknowledged). You must make your event matter, regardless of the size or scope of it, in order for it to matter to your customers and players.


Ok, I've said a lot there. And at the end of this post I feel slightly less frustrated than I did at the beginning because I hope this helps someone out there. I love playing laser tag, I love to compete and I want nothing more than for there to be more opportunities taking place for everyone to enjoy.


Sigh...this all makes me feel like I need another tag getaway soon. FYI, a tournament in California already has my registration and deposit for an event a couple of months from now. I may have to cross the country to do it, but I WILL get to play in another local tournament soon!  :)