There are a few reasons why International Laser Tag Day is significant (besides just being a great excuse to get out there and play).


It is a celebration of history. Today marks the 34th anniversary of the opening of Photon in Dallas, TX, which was the very first laser tag site ever. It launched a phenomenon in the 80s and it kickstarted the laser tag industry that quickly evolved from then onward.


It’s a chance to recognize the systems that got us to where we are now. Check out this year’s Laser Tag Day poster for an homage to Vultrek, which some would call the “missing link” between Photon and some of the key systems that followed (www.lasertagmuseum.com). 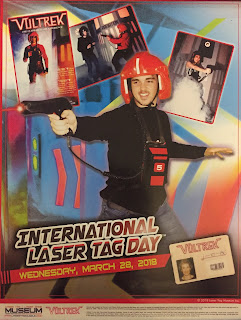 But this year Laser Tag Day means something more to me. It is something of a stopwatch set for one year from today. I have a goal that I have touched upon here in this blog (as you may have read about my various adventures laser tagging across the United States), spoken about in interviews and am now going to lay out for you the plan for its conclusion which will coincide with Laser Tag Day one year from now.


I don’t know where along the journey I made the decision, but after playing in some tournaments that took me out of state on multiple occasions and also playing at a bunch of random tag sites along the way I realized that I had been to more states than I thought. This realization planted the seed of an idea that maybe I could play in all 50 states, so it became something of a “bucket list” goal with no particular timetable in mind, but just an interesting idea that it’s something I might someday accomplish.


Fast forward to now. In the span of four years time I have made it to 40 states throughout this country and I am committing that within the next year I will have played in the remaining ten. My goal (and now publicly stated intention) is that I will return to where it all began on Laser Tag Day of 2019 and I will play Texas as my 50th state and the culmination of this cross-country adventure. I think there’s a very good chance that this will also align with being my 200th arena at the rate I am pacing. And I plan to celebrate the accomplishment in Texas style. For now I’ll keep a few surprises under wraps, but I anticipate doing this right and being an appropriate tribute to the fact that this will land squarely in the right place and time to also commemorate the 35th anniversary of Photon.


Some people have asked me if this is some kind of record. I’m honestly not sure if there is anyone else out there who has played laser tag in all 50 states. In 35 years it seems like this idea would have occurred to someone else too, but as of right now I have yet to identify anyone else in the tag scene who has done this, so please feel free to drop me an email if you know for sure. Regardless, this goal of mine WILL be achieved in one year’s time, so this is where the stopwatch really begins.


As for this Laser Tag Day, I plan to play out in Albany tonight and remind myself why my local arenas are just as important as all the various places I’ve been visiting because the local sites are where my love of laser tag began…and the light still shines. :)