The first time I ever heard of Stratum was when Nate’s girlfriend from Arizona described the massive arena near where she lived and told me that it was an absolute must for me if I ever had a chance to go to Arizona. This was well before my 50 state mission was even an idea yet. But I remembered this, researched it, learned that this site calls themselves the “World’s Largest Technotainment Laser Tag Arena” and knew that this was a site I really wanted to visit. I’ve called them in the past trying to work a visit into previous layovers I’ve had in Phoenix (as the site is in Mesa, about 20 minutes outside), but somehow the timing never worked out right…until now. 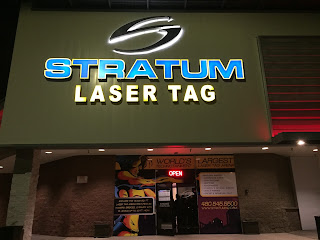 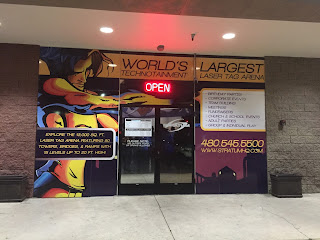 If the New Mexico leg of my trip sounded crazy, just wait. I left Albuquerque and got on an early evening flight to Phoenix, but the catch was that to make my connections home again I would have to fly back to Albuquerque that night, getting in at 2:00 AM. So I actually had an even shorter window of time for this trip. Believe me, one day I will get back there and play properly for the entire night, but at this moment I just wanted to check both Arizona and Stratum off my list. I called ahead to make sure they could accommodate getting me into a game right away and then I was on my adventure, landing in Phoenix around 8:00. Off to Stratum in Mesa!


Upon arrival I had just missed the start of one game, so I used that time to say “been there, got the t-shirt… 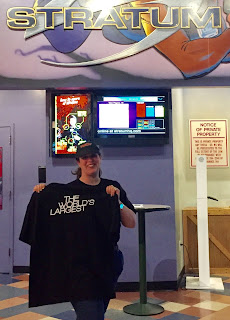 
Although he couldn’t give me any more info about it (he said there was paperwork about that designation somewhere) I was particularly curious because I know there are other arenas which make that claim and I don’t honestly know how it is determined. I did want to shirt though to go side by side with this other shirt that I bought at the EDGE 618 in Belleville, IL. 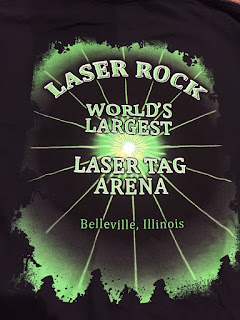 I’m not trying to dispute anyone’s marketing claim because I truly have no idea which is larger and I genuinely just think it’s cool to play in an arena as big as Stratum. Unfortunately though, you’ll just have to take my word for it that the place is big because I was not permitted to take any photos of the arena. :(


I was however allowed to have a staff member take a pic of me in the briefing room with one of their vests. 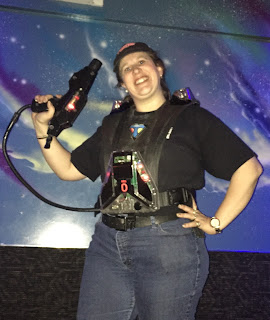 Now, this raises more questions for me than it answers. Although this looks like (and I’m told it was) Infusion, it seemed ever so slightly different. Notice the black markings? I didn’t until after the fact because everything moved so quickly. When I look back on it I wonder what that is. I’ve never seen this on an Infusion pack before. Is it tape or a decal and if so, for what purpose? If anyone can shed light on this please drop me an email. Another thing is the base. Now, in the briefing room I was actually standing right underneath what they pointed to and identified as the base, although it looks nothing like any base I have experienced when playing Infusion in the past. I don’t think it was intentional, but the staffer who took the pic cut the base out of the photo, so I will just describe it as several rectangles of clear lit panels.


There were six bases inside the arena. Two for each of the three colors, so you could potentially get four of them for a total of 12,004 extra points (which the game master emphasized a couple of times to a group of people who didn’t really seem to be listening to him…even I found myself particularly antsy for the game to start because of my schedule). I could not actually see the base component itself. What I saw was where to shoot indicated by the structure of lit crystal panels that built a shape of either a circle or a rectangle around it (presumably to differentiate the bases of the same color).


These were all to be found on the ground level of the arena and the experienced players made a beeline to them. For me it took a bit longer because this was my first time in this massive arena and I was exploring as much as I was playing. There were ramps and raised levels everywhere. According to their website it’s “over 13,000 square feet of pure adrenaline, including 90 towers, bridges & ramps with over 15 different levels”. It’s incredibly big, but I can’t say that I actually counted! :)


I do know it was really like playing in a labyrinth and when the game was over I had to use some instinct to find the ramps that would get me back down to the lower level. I wondered if I shouted “Marco” would anyone reply with “Polo”? The game was a lot of fun, but something about it did not feel like Infusion to me. Granted, it’s been awhile since I’ve played this one, but it just felt different somehow. I know that sounds weird to say (if it looks like a duck and sounds like a duck…actually this game didn’t “sound” like Infusion either if you know what I mean), but regardless it was a totally enjoyable tag experience in a very impressive and immersive arena. 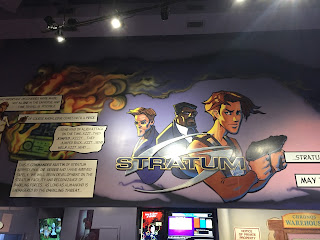 I look forward to returning to Arizona when I have more time to enjoy a full evening at this site. This trip was way too short to try to pack in all the things I wanted to and yet I couldn’t be happier that it all worked out so well and that a little creative planning and timing allowed me to tag in three sites in two states all because I ended up with an unexpected weekend off from work! 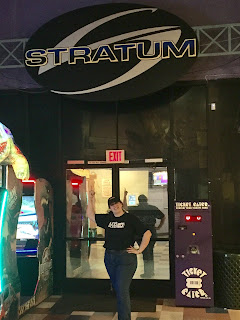