I had two very distinctively different experiences playing at the Laser Quest locations in Fullerton and Mission Viejo, CA. My first stop was Fullerton, which for some reason was not on my original trip agenda and I’m really not sure why. Of course with my itinerary changing as many times as it did over the course of getting to California it’s possible I had it on the list at one point, but I was appreciative that the game master at my last stop pointed out how close it was. I called ahead and was told that my reservation was in a game with four other players, however, when I arrived it was a packed house. That was a terrific surprise! 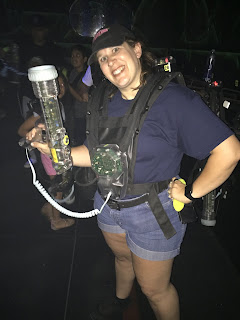 I got there just as the group was going in for the game and, as always, it was a fantastic time. One thing I remember thinking was that this arena looked slightly different from some of the other Quest arenas, but because they generally do not allow pics in the arena I have difficulty remembering exactly what the distinction was. But the game was fast paced and fun, which is what really counts. I stuck around long enough to hear my name called in first place. 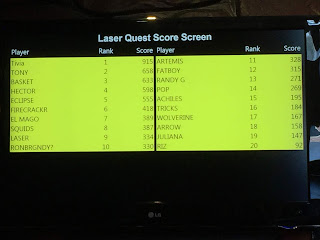 And then thanked the manager for hooking me up with pretty much the only tag swag I had acquired at this point on the trip. 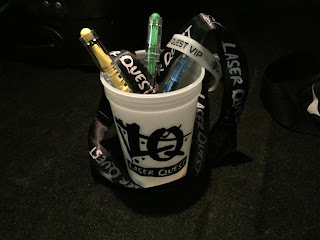 Then I said good bye to Fullerton… 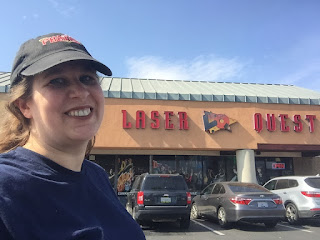 …and continued on my way to Mission Viejo. 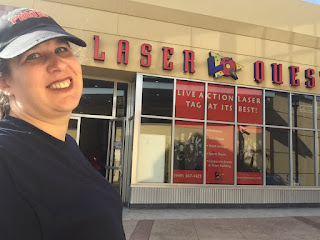 Laser Quest Mission Viejo is located at the top of a beautiful open air mall. This was such a gorgeous day that I couldn’t blame people for spending it outside and I arrived at a quiet moment when nobody else was waiting to get into a game. I explained that I only had a short window of time here and that I really wanted to play even if it was just against an employee. By a lucky stroke of fate it was just at that moment that Sensei aka Kilua walked through the door. So he agreed to a one on one and we tower locked to play a round against each other. 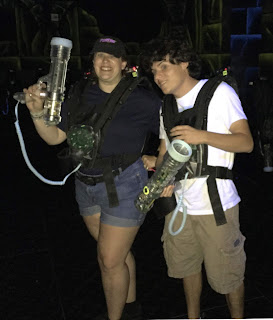 This was actually more fun than playing with in the packed arena I had just left. He gave me a very good game considering it was just two of us and we talked tag in the process. I feel like if I could practice my dogfighting skills like this more often I would be able to be much more competitive in Quest competition. Unfortunately since the closing of the Rochester location my nearest Laser Quest is in Connecticut, so I have to be grateful for opportunities like this to play whenever I can during my travels. I am very appreciative that we got to play a solid game and that he was such a worthy opponent. Thank you Sensei for the game!


I do wish I had more time to explore this mall, but by this time I was playing beat the clock to get to my final destination of the night. But this arena was well worth visiting and if ever I find myself back in Mission Viejo I will definitely be looking to play here again!