World of Sports Was a World of Fun!

After leaving the Appalachian Laser Tag Festival I was ready to get back to some more traditional tag. I was also eager to get my arena count up because I am quickly closing in on playing my 200th arena. :)


I had made a decision earlier in the day to alter my plans and only play one arena in Virginia this trip (opting to skip a skate/tag site in favor of picking up a Laser Quest later in the evening instead) so I checked out the routes and decided to take a chance on making the three hour drive from Blacksburg to my next stop, World of Sports in South Boston, VA. I’m happy to report that this was the right call and I found this stop absolutely worth driving that extra distance. 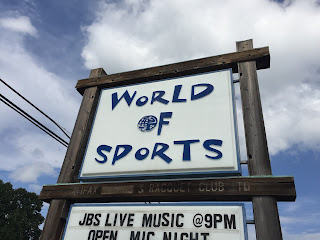 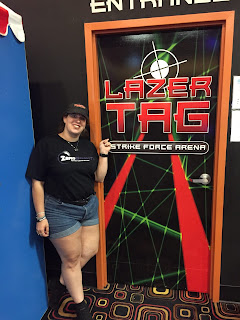 When I arrived I made a beeline for the laser tag area (although this site has plenty more to offer including bowling, go karts and more, you know I am “laser” focused on getting to the tag so I didn’t actually check out anything else). I got to the counter and Megan was the first person I met. She was great to coordinate a group quickly so that I could play this double level arena and still keep pretty close to on schedule for the night. My first game included some employees and a couple of public players for a standard round of Laserforce. 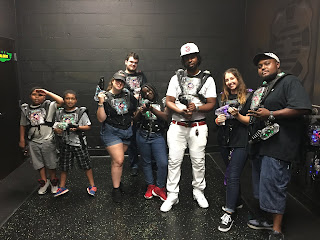 This was my first chance to check out the arena. There were two bases on the bottom and one on top, so you have to either play both levels or be aware enough of the layout to recognize that you can shoot the green base from below (as it is not protected by a structure for cover) 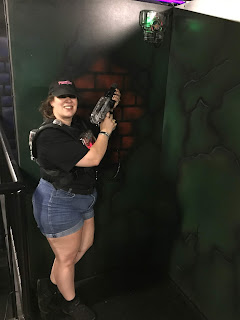 From the top level I had a great view of the arena aesthetic. There is some cool airbrushed art on the perimeter walls… 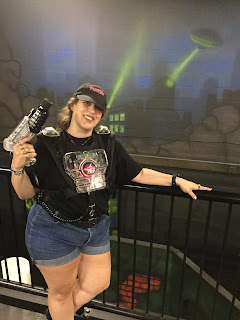 And the maze structure below has a mash-up of bricks and blocks interspersed which are vaguely reminiscent of Super Mario Brothers. 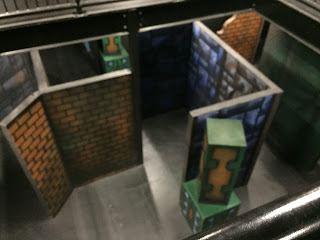 That seems particularly appropriate for certain custom game modes…they actually have one exclusive to their site that is themed around Super Smash Brothers!


Sam the Man (who I was told was THE laser tag guy at this site) made sure I had an opportunity to try a couple of the games they have customized here. The Laserforce system allows for a certain amount of customization based on the specs of existing game modes, which opens up a lot of possibilities, although not every site is either set up to or inclined to tailor the games like this. I am always intrigued to see what creative sites come up with, although most places reserve this kind of thing for member nights. But at this point things were a little bit quieter with the public players so there was an excellent opportunity for me to play against a few of the available employees. After learning a bit about their Smash Bros and Fortnite themed games (variations on vampires and other typical Laserforce games) we decided on a round of Humans vs. Warbots. Their warbot is positioned on one side of the arena and mounted on the wall at roughly the height of the second level floor. 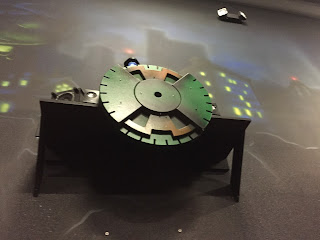 At my home site the warbot’s main function is to keep people from hanging out around the emergency exit door, so it’s way more interesting to see it functionally incorporated into actual game play! :) So we played a round of this special format, which was basically played like a standard game, but the warbot could be targeted to be used against the opposing team. I played as Hunter. 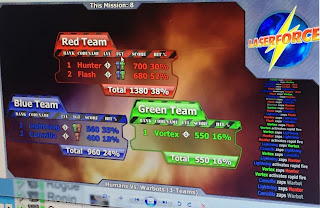 To be honest I don’t know how the scoring was done for this game because these are obviously NOT typical standard game scores for any of the players involved. I’ll just suggest that if you are curious enough about the scoring details that you visit World of Sports and find out for yourself. And while you’re there you should DEFINITELY ask to play a round of Super Speed Run. This is another site-exclusive game, but different from any other experience I’ve had.


In Super Speed Run only one player goes into the arena. They put 2:30 minutes on the clock and the goal is to see how many times you can deactivate all three bases in that limited window of time. Now THAT was interesting to me! To be honest I had not spent enough time in the arena to have found the “right” path until probably the final :30 seconds of my run, but I gave it my best shot and came out with a score that, although not high enough to unseat Megan (who at present holds the top score of I think 53,500 or something close to that), but for my first time through I’ll show it anyway. 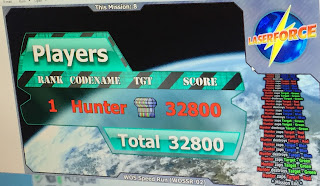 I have no idea how many bases I hit (I believe more than what you can see in icons on the screen) and I also have no idea how many points those bases are worth in this game, but this was one of the most inventive games that really got my competitive drive going! I had figured out the right path to maximize bases a bit too late in the game, but I was ready to give it another run. Why? It’s not just a matter of personal pride, but also the top score player gets their picture on the wall…and I have a good one at the ready, LOL! 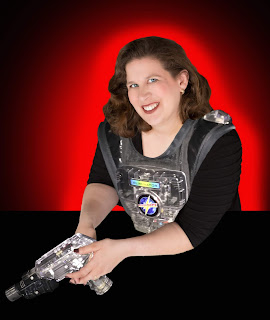 I think this is a VERY motivating incentive. However, when my round was over I could not go in right away because a party group was on deck to play. So I’ll just say that if ever I pass through southern Virginia again the challenge is on! ;)


But because I had a schedule to keep in order to play all the sites I wanted and make it to Charlotte, NC in time for the evening’s LQ Ironman I had to say farewell to World of Sports with my thanks for letting me experience something cool and different with your custom game modes. I had a blast! 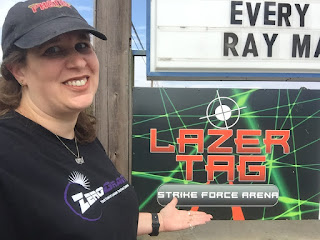