Tag is Back in Albany!

Playing a full night of laser tag followed by sushi at my favorite restaurant in Albany somehow made me feel like something that has been missing from my life for the past few months has finally been restored. These are the two activities that I have missed the most since March.

I have been able to play a few sporadic games of laser tag as a handful of entertainment venues have gradually started re-opening in NY, however these games have been way too few and far between. That’s why when I heard that Apex Entertainment in Albany had re-opened I made a beeline for it this weekend, vowing to play every game I could for the duration of the night. I enjoyed playing with a variety of players and groups and it was just so great to get out to play again!

Upon arrival I saw a familiar face (well half a familiar face as of course everyone was behind a mask) and Josh and I compared notes about the changes to the laser tag scene in the area. However, the chat got cut short when I realized there was a group by the arena entrance ready to start a game and I was definitely going to join them!

That first game was small, but seriously awesome. These guys played hard and gave me exactly the kind of competition I was looking for. I left that game saying this was already the best night I’d had in six months and it had only just started. 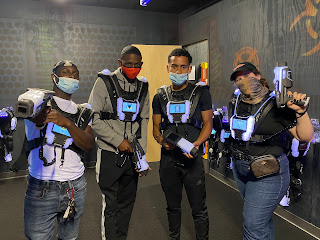 Laser tag is by it’s nature both a social and socially distanced game. After all, if this arena is (I’m guessing) in the vicinity of 4000 square feet and currently running a maximum of 10 players you can do the simple math to see that there is PLENTY of space for people to spread out and play without getting too close to each other. The staff were all very attentive to disinfecting the packs after every game and making sure everyone only touched one pack. Personally, I wore the same pack for every game (ironically named Warlord...Photon throwback) so even after seven games I only touched one pack the entire time I was there. This was actually due to my own deliberate attention to keeping an eye out for it in the vesting room, but regardless I felt very comfortable that things were kept appropriately sanitized and distanced.

So, that first game was a great start to the night! For the second game I had to switch gears. This group included some enthusiastic parents with a group of kids and when I play with young ones I implement my four foot rule (aka no deliberately tagging anyone under four feet). This game I played lightly and just for accuracy instead of score. When manager Mike saw the results he assumed I was the top score, but in actuality it was one of the parents who didn’t mind tagging hard on their own kids. Meanwhile I looked at my accuracy as the accomplishment that game while I watched as the kids all left the arena as happy campers.

The third game was against a couple of guys who I thought would play harder than they did, but the fourth was definitely the best game of the night with a really solid group of ten players (the current maximum in this arena) including seven college aged guys who showed up as a group. I wish they had stuck around longer. The fifth game was another family group, so four foot rule back in effect, but perfect accuracy still gives me a sense of game satisfaction even while deliberately letting the young ones get their tags on me. The sixth game was another big group and the seventh game was a bit smaller, but a still made for a nice, full night.

I haven’t played a full night of tag since March and I really missed it. I’m certainly glad that Apex has their Albany location open now. It was a great time! Throughout the entire night I was very aware that, as a result of the pandemic taking its toll on other small laser tag businesses, I might have to get used to having a new home laser tag site. I never expected that it might end up being in an FEC. For a laser tag community to develop here I think there is one suggestion I might make. Right now this location is only offering “per game” pricing which I believe can be prohibitive for getting customers to stick around for multiple games. Price incentives to keep them playing can often help to turn an occasional casual player into a returning customer who shows up every week. Even though I was ok with purchasing seven individual games in a row for one night, I know that I am the exception and not the rule. I will also not able to keep up my normal playing frequency at that rate. I noticed that I was the only person there who played more than one game of tag the entire evening, even though everyone who played had a good time and I’m certain that if there were pricing incentives others would have played more as well. I would strongly encourage the Apex management to consider designating an “all you can play” night with a fixed price for that time window, even if it’s just for a few select hours once a week to start developing a laser tag community here. With the other arena in town having just recently closed down there is definitely a gap to fill. I have played at many arenas where players like to come out on these nights when they know that they can plan on seeing other familiar faces and make a full night of it...and while they are there most will also partake of the bar and restaurant options as well. These nights foster repeat business from people like me. It’s also a way to place the more competitive players in a setting to develop skills with other competitive players versus bringing their A game into a round with casual customers. I’d love to see this develop because I could definitely see myself becoming a regular player here and I look forward to laser tag thriving again as we get past this pandemic. Now is the ideal time to start building a base of clientele that can be both competitive and (dare I say it) truly social. 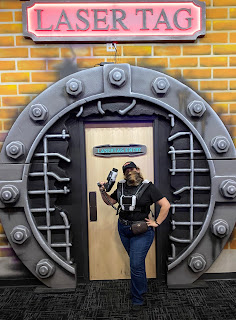 I’m so glad I had the chance to enjoy a night of tag again out at Apex in Albany. I probably would have eaten there as well, except I had decided to enjoy one more thing I had missed since March. So I used those games to work up an appetite for the BEST sushi in the capital region at Sushi X in Latham.

A full night of laser tag and sushi? This was an amazing way to start the weekend!