Vermont: Is This Nexus?

From Maine to Vermont was a long haul on day two before we even got to play any tag. We arrived at Twin City Family Fun Center in Berlin, VT and it was...REALLY quiet. 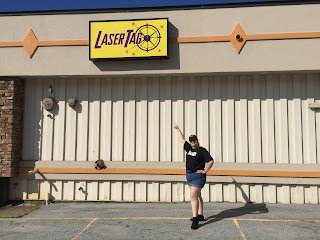 Clearly this was going to be a one on one...with a twist. This place used Zone equipment, specifically Nexus. That's according to the game master. However, we suited up with vests that were familiar, but yet somehow slightly different. 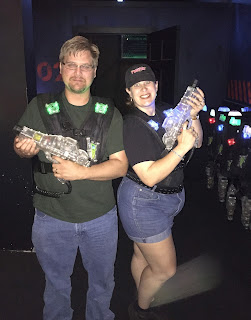 Actually, the entire game was familiar and yet very different all at once. This seemed like older equipment, so I want to do a little research to be clear on what we were playing. The sounds made by the phaser were unlike any I had heard in other Zone games and as for the bases...well, we were told you could tag each base twice, but based on the printouts I am not entirely certain that was the case. It seemed that Paul was able to tag them more than that. And they seemed to deactivate a little differently too. Then the thing that was most unusual to me (as I've never been in a Zone arena that had these) was that there were targets (not bases, but small red targets) all over the arena. I figured they must be for extra point and/or to activate the special power-up modes. During briefing the game master told us that the modes we could get included rapid fire, stealth, shield and one that nobody in the place understood called "relay". I suggested an educated guess about that one, but can't be certain if I was right.

Pretty much this game came down to tagging and re-tagging targets and an exploration of the two level arena. It was one of the strangest experiences I've ever had playing Zone because it was so different from what I expected. I halfway wonder if this was the generation of equipment my home center had prior to Rift. Regardless, it was an interesting chance to play and it sparked some curiosity in me to find out more. 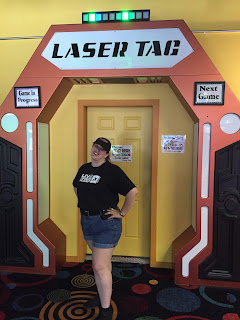 It certainly made the trek through Vermont worthwhile! :)