It's easy to have a sense of deja vu when visiting laser tag sites. I've been to so many and played the same systems over and over (and seriously, every Quest arena looks EXACTLY like the others), but this time I walked into Arena 51 Laser Tag in Middleburg Heights, OH and was immediately struck by the sense that I had been there before. Then this feeling was confirmed when I walked up to the counter and the girl at the register says to me "You've been here before, you're the girl who travels all over for laser tag, right?" Lol...yes. Well, I didn't immediately realize it because their name, system and ownership have all changed, but this was previously the Zone site called Laser Xtreme and I played it on my way back from last year's Battle For The Fort. 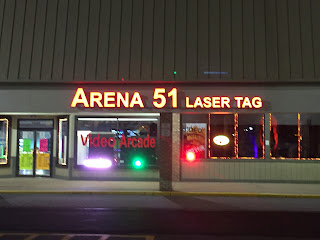 I was ready to check this off as my 97th arena, but knowing that I've actually been here before, does it count? It's like 97 and not 97 at the same time. Because it's an entirely different name and system I think I'm going to count it...but I may amend this if it impacts which arena in California ends up becoming my 100th in a few weeks. The 100th arena I play will be someplace really cool...and I will NOT let it end up being a Runner site because of this technicality! :)

I was there a day early to get some tournament practice. A few of the members who were also signed up were there as well. The first few games I spent just getting a handle on the map. This place has a somewhat convoluted flow with one upper level home to the blue and red bases with the green base in another upper level. Since I don't usually get a home arena advantage I have to learn the space fast when I travel.

There were a few members practicing as well so I quickly got an idea of what kind of competition I'd be facing and to be honest it was more impressive and intense than I expected. However, most of the night was spent playing specialty games (am I the only one who hates playing Vampires? ...but playing VIP was cool). And although I firmly believe tournaments should be played on even footing I did purchase a membership card to start earning the advantages some of the other members had. 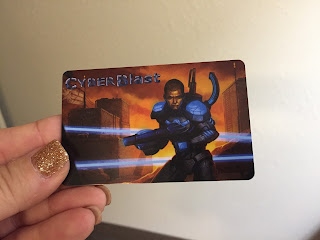 A few things relevant to the team games with the settings they were using here...shoulder and phaser hits count as stuns, which take a player out for five seconds while a front or back hit is worth more and deactivates a player for eight seconds. Laser Burst here gives you three rapid fire shots per trigger pull rather than the continuous stream of rapid fire that I had been practicing at my center. And for future I must remember that there are numerous targets on the bottom level while most players play on the top level, so it could benefit someone to stay hidden below. And the elements that shoot back at you are set for 500 points even before hitting any player, so the bonus elements are worth paying attention to.

I spent all of Sunday playing at Arena 51 (they had an exceptional value AYCP going on from opening to close), but the next day I wanted to check out the Quest site in Akron. 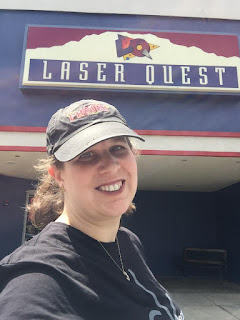 I enjoyed the opportunity to play. I haven't been able to get in a game of Quest since the Ironman I played in Massachusetts. So this was a nice side trip. 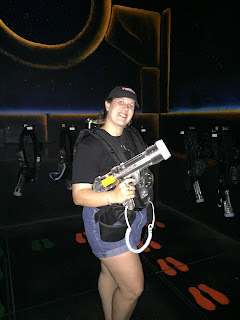 Hoping Scene 75 will have their new site open by the next time I pass through this way. But I've gotten a fair amount of tag in already, so this will just be one more reason to return to Ohio. :)