Spontaneous Tournament Adventure...to Utah and Beyond!

When I left to go to work on Friday morning I did not think I would be headed for Utah by the afternoon...but life can surprise you! Having learned only the night before about a tournament with Nexus being planned at Seven Peaks in Lehi, UT as part of their "End of Summer Event" I wanted to play, but really didn't think crossing the country on a lark was feasible. However, I already had my tag clothes in the back of my car since I intended to play locally tag that night anyhow. I called the center and was told that this is the largest laser tag arena in Utah and that they would reserve my spot by phone. That claim to fame pretty much sold me on the idea that I needed to be part of this. So with nothing more than what I had with me for the day (figuring I could buy whatever else I needed once I got there) I hopped on a plane Friday afternoon, due to re-routing/connecting flights I actually slept in the airport that night and made it to Salt Lake City in time to rent a car at 10:30 in the morning and get to Lehi by noon to play. Well, this wouldn't be the first time I competed with literally no sleep! Laser tag runs on Dunkin'. :)

Ultimately this event was the most unusual tournament experience I've ever had, but plenty of fun and our team took home some cool prizes for coming in first (more on that later). 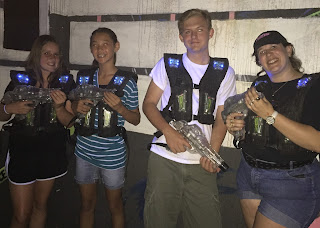 I got to the site and met the manager, Scott, who I had messaged with the day before. He showed me around the arena, which is huge, but only half of it would be in use today as they are doing some significant remodeling. Once renovations are completed the arena will have a space theme and look more like this... 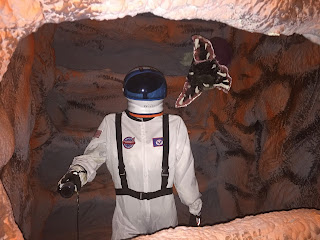 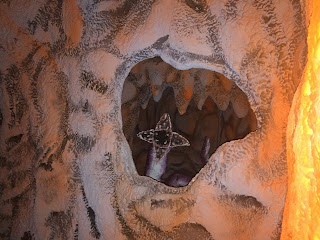 But for now there is a different aesthetic. :) 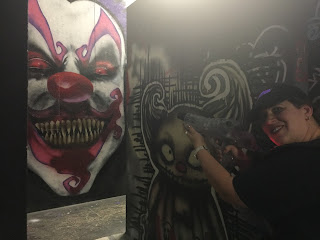 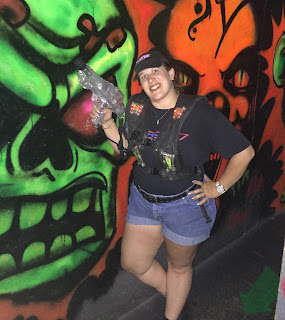 The arena is not what you'd call "balanced", but there were lots of hides, alcoves and ramps, the most useful ones leading you to the highest ground above the in-arena scoreboard. Also lots of side rooms which make the space unique.

I warmed up by playing in a few public games (with quite a few players in those mid-day rounds) and spent that time exploring the map. Then at 1:00 the tournament teams gathered.

One of the things that made this event unusual was that in spite of early anticipation of a higher turnout and plenty of people playing the public games just beforehand, this event did not draw a ton of players so the teams were figured out on the fly and the intended format was changed accordingly (which was fine and worked out for the best). It was a first time event at this site and I imagine more of a learning experience for the organizers (but I give them lots of credit because, hey, I have to leave my state to do this more often than not). Kudos to those who participated. So to call what transpired a real "tournament" is a little broad and using the word quite loosely, but it was fun regardless. 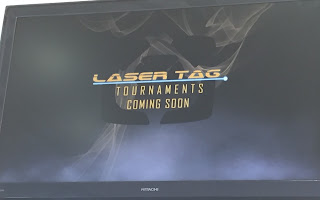 My team included Ryan (aka Target) who is actually a competitive video gamer with some impressive skills (this guy has even had sponsors in the competitive video gaming scene...cool!) and a couple of more novice players, Cassidy and Mae. There were also players who came in from another local center where Nexus is run too. They had a couple of young guys who played quite fiercely...reminds me of home. :)

Teams went in for three consecutive rounds, high score team to be named the winner. No bases were active and this was scored a bit differently from most other Nexus games I've played. Single points were earned for each tag registered. So high scores were calculated in double digits, not in the thousands like I normally expect.

At the halfway mark I enjoyed a moment to sit in the cafe and chill with some Dippin' Dots and get to know my teammates a bit. This is when Ryan told me about his experience being sponsored in the competitive video game world. I am impressed and it's a shame the competitive laser tag scene doesn't have companies taking similar interest.

When all was said and done we had the high score and my team was invited to select prizes from the arcade. I took home a virtual reality 3D headset (which was perfect since a lava lamp would never be allowed on the plane going home!) and we said our goodbyes. 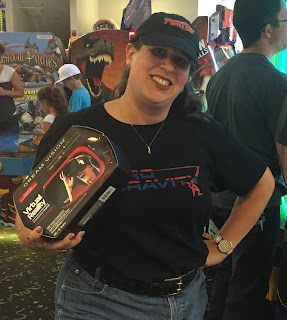 Things ended early enough that I had just enough time to do something crazy... I drove three hours north into Idaho to check off my 26th state and visit what would become my 100th arena (as my stop in Utah was #99). So thanks to everyone who was part of my visit to Utah and this completely spontaneous tournament adventure!