Perception is NOT Always Reality

My boss has a favorite saying…”perception is reality”. Well, not entirely so in the case of my second stop in Omaha.


I had a list of places I had planned to visit, but as I mentioned previously there was a significant flight delay that threw my schedule way off track. So I had to make some decisions about which sites to visit and which to cut from my list. My first one was a no brainer to keep and for my second one I selected a site which had impressed me with their website.


The website for Family Fun Center XL promotes their Black Ops Laser Tag and games with “awesome new themes” like Wizarding Laser Tag, Rebel Squad Laser Tag and a list of “intermediate game modes” and also “advanced game modes” with games I’m familiar with such as Shadows, Highlander, Gladiator and SM5. As this is a Laserforce site I was anticipating a more advanced level of competition.


I arrived on a Friday evening. I was a bit concerned by the lack of cars in the parking lot as the place genuinely looked like it might be closed. When I walked in I looked around and did not see any other people besides the girl who came up to the counter. I told her I would like to play some laser tag and she asked if I wanted to play against her. I said that would be fine (what else was I to do at this point) and she said that two people isn’t fun, so she went to find some others. She rounded up a family group and we all got ready for a game of laser tag.


I passed an area with membership kiosks and I asked about using my card, but it didn’t appear to work, so I entered without signing in…just let the record show that I tried.


The employee suited up with us and we went in for a nice, light game. I had imagined that I would be playing some of the advanced game formats with a chance to pit my skills against other level six players, but instead this is the group of “space marines” I challenged instead. 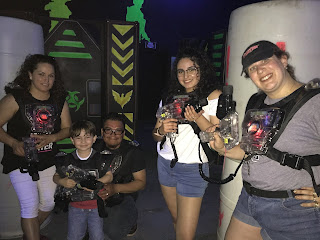 
So I went in just to have fun. The arena was only a single level (I gather from their website that their previous arena must have been larger) with some airbrushed neon accents and some paintball imagery on the walls. 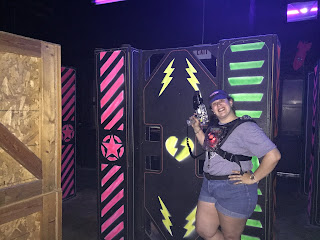 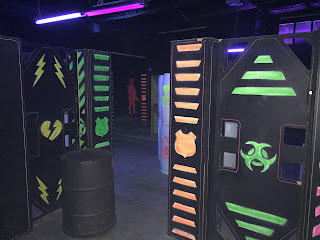 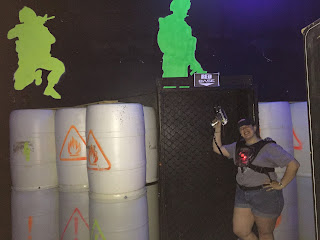 Pretty early on in the game I could tell that the “game master” was out to win, so I did enjoy giving her a run, while making an effort not to be a try-hard to the family group. I easily won this game with a score that would have been a pretty decent boost to my average if I had been able to sign in with my card. But remember, I couldn’t. And yet at the end of the game the employee said “your card must have worked after all because look at the screen, you got trophies.” I told her that, no, my card did not work and those were not trophies on the screen, they were bases. I pointed out that I had gotten both bases and asked why she hadn’t. I kid you not, this was her response…


Without her having that key piece of information I guess there was really zero chance that I was going to be playing anything advanced this night. So I decided it was time to call it a night and head to my hotel…but not until I took a pic with the giant video game out in front of the center. 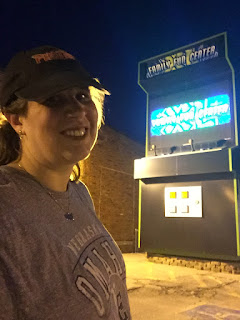 So sometimes perception is NOT exactly the reality, but hey, I still got to play some tag, so chalk that up to being better than not playing at all.