Sometimes when I travel I have to show up at arenas at odd times just to be able to stay on track to visit as many sites as possible. This was the case when I got into Manhattan, KS and walked into Widgets Family Fun at 10:00 in the morning. Now, some sites are cool with accommodating me early in the day, but that doesn’t always translate into a decent game. However here when I requested to play against a couple of staff members they really brought a good game to get my heart rate up at the start of my day! 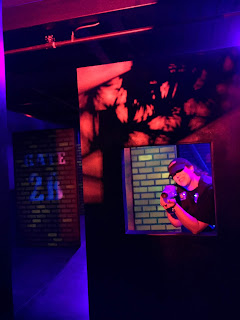 I vested up for a game of Helios against Alyssa and Caleb. 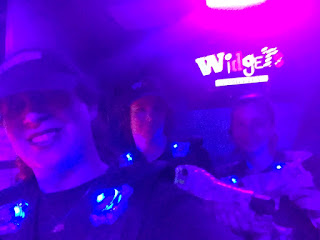 We entered their “Clockwork Quest” arena and something immediately struck me. Everything around me looked like it had the hallmarks of being Creative Works arena, and yet nothing looked familiar. The theme was distinctive and I could not recall ever seeing this particular arena aesthetic before. When we finished the game I discovered there was a reason for that.


But before I could worry about the walls I had a game of Zone to attend to. At first I suspected that neither employee was playing “for real” as is sometimes the case when employees play against a public player. But it wasn’t too long before that turned around. I think once it became apparent that I am legit and can hold my own that a lightswitch flipped and suddenly they were giving me a good game…much better than I usually expect at 10:00 in the morning!


The double level arena has a few really good positions for catching an opponent by surprise. It also has one feature that can definitely be exploited by a player who is paying attention…it is entirely possible to get from one end of the top level to the other between the first and third shots of a base deactivation. Meaning that if you are on top and quick enough when you hear the first “base under attack” it is totally possible for you to make it to the other side to comp that base attacker before the deactivation is completed. That is a useful piece of info to know…especially if they do end up hosting a tournament in the future. :)


When the game was done one staffer said to the other with surprise “you came in second?” So I relished knowing what the result must be. :) Then I turned my attention back to the aesthetic and took some photos. I guess I would describe this as part “inner workings of a clock tower” and part “air adventure”. There was a clock structure built in the center and the walls looked like you were looking out from the windows to see the view “outside” with air balloons floating by. 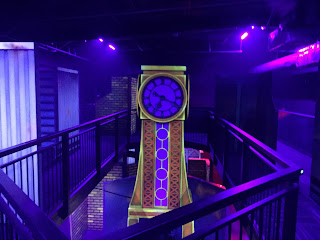 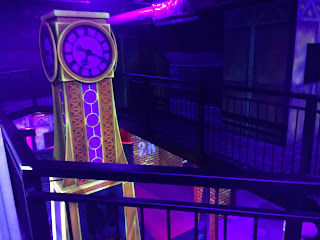 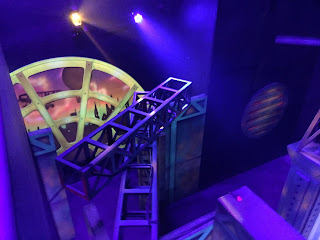 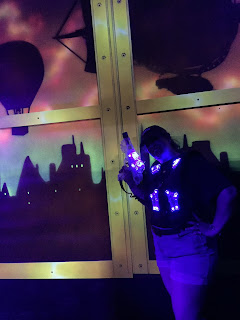 And the bases were housed in a hangar-like structure. It all worked well and had a vibe slightly like it was from another era. 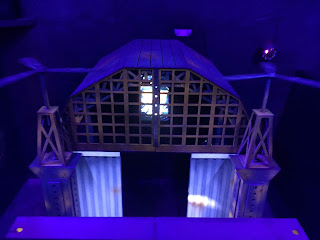 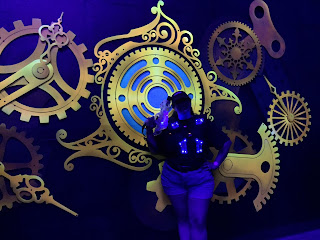 When I asked about this being a CW design Stacy gave me the back story about the arena design, which she knew well since this is her family’s locally owned business. She told me that they purchased the dirigible (there’s a vocabulary word you didn’t see on the SATs!) airship directly from the Creative Works booth at IAAPA one year and that they were given complete carte blanche to create a custom theme to build around it that would work throughout the entire entertainment center. Mission accomplished! The custom design certainly did make an impression as it got me asking questions. 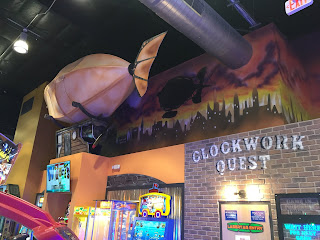 I was glad to be able to chart with Stacy a bit and I appreciated being able to take home a t-shirt and lanyard for my tag swag collection. I hope to have a chance to return to Widgets again. In the meantime, see you at IAAPA! 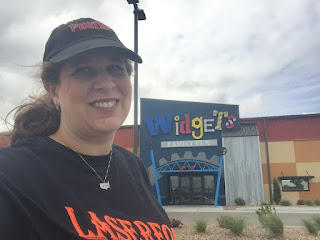