This week I took on the Badass Running Company’s “Beam Me Up 5K” virtual charity race as a laser tag challenge with my participation helping to support Feeding America to provide 40 meals for those in need. This is my third 5K challenge this month that I have completed in a laser tag arena instead of as a traditional run/walk and I love that these challenges are giving me a renewed purpose for going out to tag while also inspiring me with ways that I can make a difference as well (stay tuned). 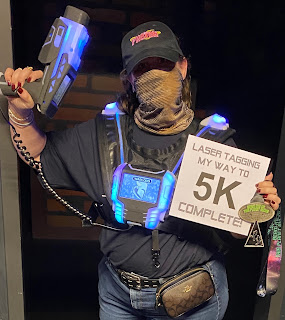 Since last weekend I focused on the central NY arenas, I decided this week to head east, back to Apex Entertainment in Albany. This arena is part of an FEC in a mall, so I took a seat and waited for other players to show up. Fortunately there was enough foot traffic that I was able to play pretty consistently with various groups throughout the day. The first group of the day was made up of some young adult players who were there to celebrate their friend’s birthday. Happy birthday shout out to Kayla! It was a rocky start when one girl smacked into a wall, sagely noting afterwards “I guess this is why they say don’t run!” However, we restarted and even just the appropriate brisk walking got my distance goal started off strongly and my heart rate up. Laser tag is even better exercise when I’m paying attention to things like that. And with a novice group I just did this game for accuracy and to help Kayla find all the bases to get her a better birthday score. 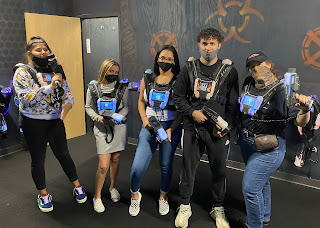 Next game there was a bigger group and over the course of the afternoon there was a nice mix of games of varying sizes. I haven’t had a favorite pack anywhere in quite awhile, but I think I’ve decided that this one just feels like “my pack”. ;) 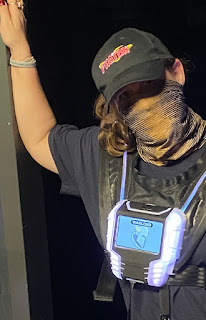 My distances per game (in miles) were as follows: .04 (that was the game that got restarted) .34 .33 .35 .36 .25 (this game...less steps, but WAY more intense playing with some guys who came ready to play hard and even tagged Amira into the game! I played properly this time just to prove that Andrew wasn’t exaggerating when he told his co-workers that I could pull 98% accuracy) .30 .35 .47 (the night was coming to an end soon so I really stepped up my pace that game)
.32

So to achieve 3.1 miles = 5K in an afternoon is a completely manageable goal and can be achieved even faster depending on the intensity of the game (or the focus on the goal). When the day was done I felt the satisfaction of having gotten out to enjoy a few games of tag while knowing that part of my registration for the “Beam Me Up” challenge benefits a really worthwhile cause. How appropriate to achieve it using laser "beams", right? And since laser taggers love their hardware, it’s cool that many of these virtual challenges hook you up with some kind of achievement swag for completing the goal, like this glow in the dark medal. 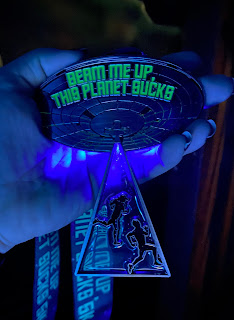 Hmmm....laser tag...a donation for a great cause...while earning an achievement medal.... Anyone want to guess how those things might all tie together during the month of November? Well, as I said in the beginning...stay tuned!