I Had a Little "Spare Time"

The last time I had ventured into CT I won a gift card loaded up with laser tag and game cash from the tournament in Bristol, so it seemed appropriate to use that up in CT also with a visit to Spare Time locations in Vernon and Windsor Locks.

What I love about Spare Time is that after visiting several of them (five or six I think) I have not seen the same arena theme repeated twice! Unlike another large FEC chain where I can stand in the same spot and take the same photo in every location (we’re all thinking of the same place, right?) I did not have that redundancy here and have really enjoyed each Spare Time for the unique experience I’ve had at each one.

Vernon was up first and I really LOVED their Jurassic Jungle dinosaur theme! Of course, I raise a “baby dinosaur” (aka my little gecko Leon), so I thought this was a really cool look that I don’t come across all that often. 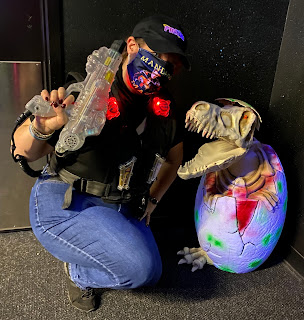 The lobby area was nice (especially in that they had couches to lounge on between games). 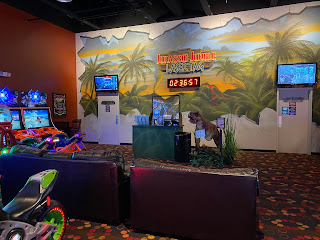 And I snapped a photo with their mascot, Roxie. 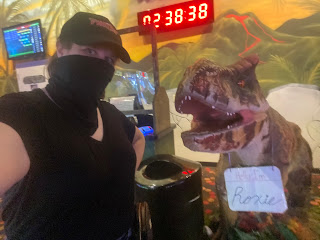 But inside the arena was a little bit unique. Perched atop the greenery there were dinosaurs guarding their terrain. 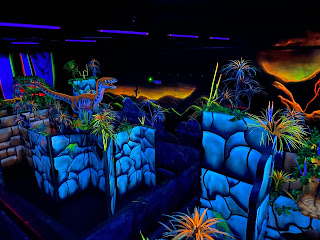 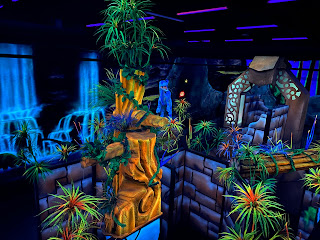 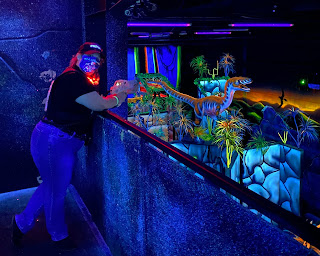 Although it wasn’t the design aesthetic that struck me (as it was classic CW work the walls and such were typical). And for what it’s worth that is not a criticism. I really do like this theming and thought this one looked new and really pops, which is also a testament to how the right lighting makes a difference. 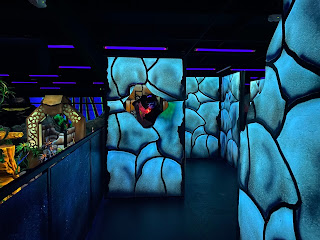 But what was interesting about this arena was that it was a double level arena with only ONE ramp access point to the top. It was a VERY long ramp that circles around the entire bottom of the arena, gradually getting you to the second level. The thing is, with only one way up or down you had better REALLY want to change your position because once you move on either end it is really easy to track which way you are going and there is nowhere to hide on the whole length of the ramp! 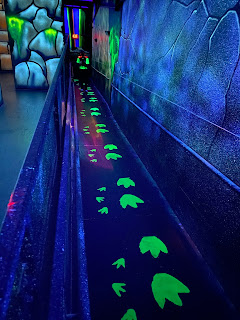 I enjoyed tagging with Tanner and Evan and getting to finally use up a little of that tag credit I’ve held onto for about a year. I followed up the game time with a plate of some delicious quesadillas before leaving the Jurassic Jungle behind. But before we leave it completely, it's been awhile since my little guy appeared on the blog so let me be proud mama…here’s a recent pic of Leon being very dino-like as well! 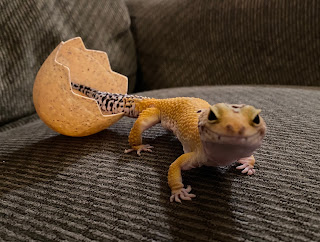 With a little more spare time on my hands (aka the rest of the night that I had earmarked to play in my final location) I headed for the Spare Time in Windsor Locks. This one was called the Infinite Station arena (meaning clocktower theme) and I had seen this elsewhere before, but again I give Spare Time credit for not duplicating between their own arenas. 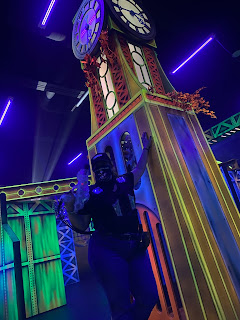 When I first arrived it was still early in the night and I was the only one there for tag. However, staff member Anthony was willing to give me a 1v1 game and this was the best game of the trip so far! He played really well and prior to this trip it had been so long since I’d gotten to play hard with my favorite gear, so this was just a really great time all around. Better yet, the final score came down to the difference of only one tag! I love when games are tight like that! When we left the game Anthony told me I really had to play against his co-worker, Adam, who would be showing up any time now. Adam takes the game SERIOUSLY and apparently nobody had ever beaten him since he’d been there. Challenge accepted!

While we waited Anthony was kind enough to lend his photography skills to my arena pics so I could showcase the arena with some cool angles and lighting effects. 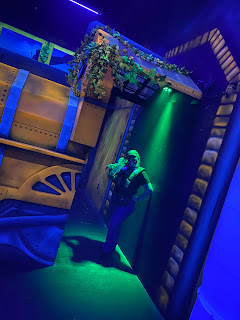 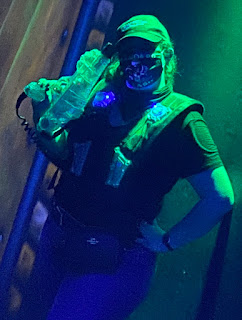 One of the noteworthy aspects of this single level arena is that there are large mirrors, some of them even full length, scattered all throughout, which means you really have to be aware of your environment or you could be tagged in your own reflection. 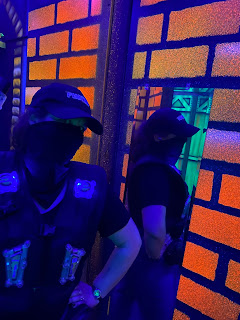 When Adam arrived he walked up to me and asked if I was his challenger. I smiled (though you can’t tell from under the Mandarr mask) and said yes and was ready to go. We played for the best two out of three games.

The first game I think I surprised him. We were tagging in sync for a lot of the game, dancing around the arena as sparring partners. Sometimes we were trading tags simultaneously, then at other time each of us had our moments knocking the other one down with a surprise shot. When that first game was done I was the winner. I took a quick break for some ice water, during which time Anthony shared my victory with the manager telling her I was the first person to ever beat Adam, so that was a nice moment of recognition.

However, the next game he knew better how I was going to play and we both needed to use a little more intuition to predict the others moves. We did a little more base-sparring this game and ultimately Adam won round two. Very well played (and it is his home arena, lol) so we had tied it up.

I had to wait out a game in between while Adam took a family group in for a game of their own. I sat back. Although I certainly could have joined in, by this time I didn’t want to have to tone things down. If given the choice I would much rather play a hard fought 1v1 than scale the game down as is sometimes the case when public groups are in the mix. That gave me a chance to chat with the game area manager about other arenas and we both reminisced about our respective experiences at various Ultrazones. Laser tag really is a small world!

When we returned to the briefing room I noticed something that I had not given thought to prior to everything these last few months. I am confident that all the arenas I’m going to are sanitizing their equipment and I’m opting to make certain I play using the same vest every time, but what I noticed was that Adam had changed the lighting feature on two rungs of the vest rack so that they glowed yellow to specifically identify which vests were ours in between other games so there was no chance of anyone else using those vests in between and until they could be sanitized when we finished. This is really smart! It makes sense for this to be an available feature, but it isn’t something I had ever seen before. I’m not sure if all manufacturers have a feature like this for their system-specific racks, but kudos that Zone at least does, even though I had never even considered it until now. I’m sure that is quite useful in keeping track of the vests that are “in use” versus those that need to be cleaned.

OK, time for the final round. Third game Adam and I went into the arena wishing each other luck and declaring that this was “for the glory” and “for the honor”, which any eighties kid knows you have to follow up by shouting “OF GREYSKULL!” So that’s how we started and this game was intense because we were both clearly being super competitive about this round. It was a great way to round out a full day of tag and an excellent night of competition with a skilled player. We both played hard, but youth won out and Adam took the win this game. I have total respect for that because the way he played absolutely made my night and made Spare Time Windor Locks the most memorable stop this entire trip. Thank you Adam! 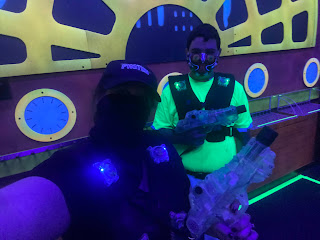 He sent me off with a consolation prize, a tag coupon as an award for being the first person to beat him in a game, so I’ll keep that as a nice memento. But above all else what I’ll keep that means the most was the memory of a great first experience tagging back “out in the wild” and returning to some small semblance of normal with this day trip to Connecticut. Thanks to all the arenas that helped me to remember what I love so much about exploring new places to play laser tag! 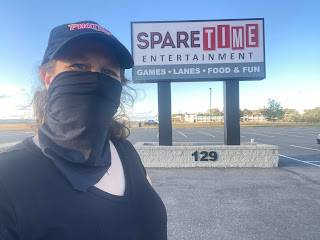