I live in New York and I have been (and will continue to be) very diligent during the course of the last few months about following recommendations and safety precautions. The big three recommendations (wear a mask, wash your hands and keep your social distance) are actually very reasonable to follow in a laser tag setting, so I am starting to feel more comfortable with following that guidance while baby-stepping back into a few laser tag activities in the places where it is currently permitted and the businesses are open. As an advocate for the industry and also as someone who has witnessed safety precautions in several arenas first-hand I feel comfortable with this, particularly knowing that laser tag is a game that already has an inherent element of social distancing built into it. I will continue to support these businesses in the ways that I can, both by being a customer and by providing them with some exposure and spotlight here on this blog. All that said, this weekend I made my first real tag trip since March. I have been attentively monitoring the travel restrictions for my own state and the states that border New York to make sure that I adhere to all recommendations and did so as I traveled just over the state border into northern Connecticut to play at a few select laser tag locations as part of a one-day day-tripping adventure.

My first stop was to Sonny’s Place in Somers, CT. 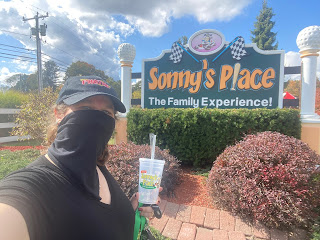 This is an impressive family entertainment center with both indoor and outdoor activities for all ages. From go-karts to zip line and batting cages along with a huge pavilion, they have a lot going on for everyone to enjoy and the day I visited it appeared that there were also some special Harvest Happenings going on with some designated stations for a trick or treat trail. However, I made my beeline straight for the laser tag arena to sign up for a session of Lasertron. 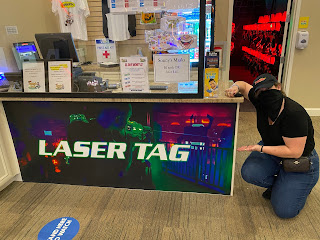 Ironically, I showed up at what turned out to be the perfect time, even though it happened to be a quiet window in the early afternoon. Rather than take the time for a full session, I instead got to do a private 1v1 laser tag game with staff member Drew (aka Drewbert), although I saw an announcement online that a couple of hours later that same day they reached a point where they were hitting their full capacity and advising people about that via social media. I think apprising people of that was really smart, but for me the timing worked out well since I just wanted to play a single game and check out their awesome two-level arena. 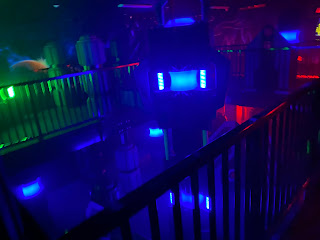 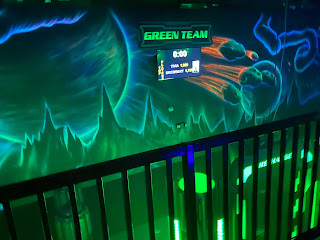 General manager Chris told me that the Lasertron arena was added in 2017 when they renovated and expanded their building. They have an impressive space and I was looking forward to getting some time to explore the arena once we went through the formalities. They have taken social distancing measures including limiting their arena to 12 guests per game, briefing in the open hallway in the front, making sure everyone wears masks and reminding that instead of keeping a standard five foot distance that now you must maintain at least a six foot distance. Even though it was just us, Drew diligently went through the information before we went in for a shields up/down solo round. 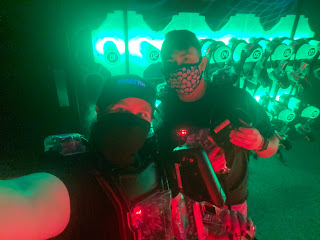 However, he also informed mw that they also offer some Halloween-themed game variations including Zombies (basically a typical Zombie format with instant recharge when you go red), Vampires (a variation that requires you to go back to the base to recharge), dodgeball, respawn elimination and tactical. I would love to return another day when I could spend an evening trying out these other formats, which I have played on some systems, but not with Lasertron.

As for our solo game, this was a great way to start the day! Drew gave me some really good competition that resulted in a pretty intense cat and mouse game. A little intuition (and listening for footsteps on the upper level) helped me to figure out his moves during the game, but what is really great about a game like this is that almost all the shots are long distance sniping across the arena so there is incredibly ample space, even if there had been more players.

I took the top spot, but hats off to Drewbert for keeping it competitive! 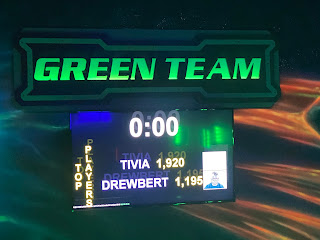 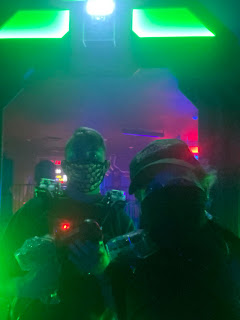 And thanks to the entire staff at Sonny’s for accommodating getting me into a game. I bought a souvenir cup to remind me of the experience and look forward to being able to try a few of their other game formats the next time I pass through Somers!