Freedom Leggings with a Half Hour to Spare

To me this pair of leggings represents my freedom to choose my place in the laser tag community without pressure to play in any particular spot. Sound a little bizarre? Welcome to how my mind works. :) 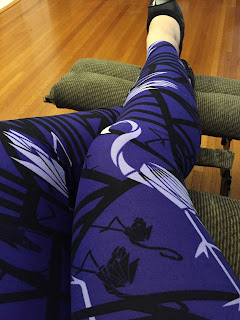 Let's review what has happened recently and maybe that will make more sense...

Since December I have been playing tag somewhere every week as usual, even though I have not kept up very well with my blogging. I have most often been frequenting Zone sites in both Syracuse and Albany, checking out new places (like my excursion to the little center in Ithaca) and planning my next big laser tag trips...I kid you not, had it not been Spring break I was seriously about to hop on a plane to North Carolina and play a small tournament down there this past weekend! However, I have not been back to the Force center this whole time. There are a few factors that went into my conscious decision to leave. I don't need to get specific about the reasons here, but there were enough of them that I chose to walk away when a final straw broke the camel's back. And I'm sorry to say that tempered my enthusiasm for that particular system. So, since December I've played every weekend somewhere else.

Three weeks ago the "somewhere else" was once again FJ. I love playing there...it feels like home. I'll admit part of what I like is the affirmation of my skills as I regularly get props for being one of the best players there, but it's also because the atmosphere is so different and upbeat. It's the difference between operating like a business where they want the customer to have a good experience versus walking into a teenage clubhouse. Atmosphere aside, I also really enjoy the people I get to play with there. If memory serves I think Nate might have been game master that night and Dakota was off duty just playing. They always jump in and give a good game. Plus Joe, Tyler and Tommy showed up and were even joined by Ass who came over from the other center to try our place for the first time. It was kind of like a blast from the past playing with both these guys there like we used to every week when I first met them. And I've got to say, they are the players that made it a really fun, competitive, "work for it and earn it" and good game to all at the end kind of a night. I left that evening feeling like that's the kind of tag I want to be part of.

Fast forward to the next weekend. I guess I must have played on Friday because I wasn't actually at tag on Saturday...I was hanging out backstage with Vanilla Ice and the other acts at our 90s concert. Some nights I really love my job! :) 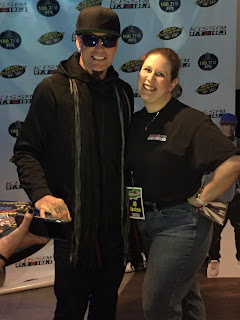 So since I worked late the night before I woke up Sunday calling it my day off and my choice had been made back in December that I did NOT want to play in the ECT at the Force center on my day off...or the subsequent couple of days. A couple of points about this...this event was announced literally days after I had been told they were "done trying to put tournaments together" there. This on the heels of four (yes, I can name four) smaller local tournaments and a league being announced there, but not actually happening with the blame largely falling on member egos and apathy. So my choice to not participate was shrouded in irritation over what does and does not actually come together with involvement from the very same member base (plus the visitors from Detroit and a couple of players from Pennsylvania). Another side note...if anyone really feels that this represents the entire East Coast please look at the Laserforce site map. I'll make it easy for you. Here it is...

Ok, moving on. I decided not to play this event mostly out of some internal sense of righteous indignation. Which was easy enough to muster and since I was no longer playing at this center I obviously would not be practicing. And who in their right mind enters a tournament without practicing? (rolling my eyes again in the Syracuse direction)...but I was curious and wanted to wish a few of the players luck. So the perfect reason to stop in that day (first time I had walked in since mid-December) was to shop some LLR with one of the visiting players. That's when I found these leggings. Now, since I was asked within thirty minutes of start time whether or not I'd be playing I have no doubt I could have jumped into the mix right there on the spot. But I was feeling a bit cheeky and instead replied "there's still half an hour to go, I don't actually believe a tournament is going to happen today"...homage to the last four, thank you. My sarcasm was tempered with humor as my intention is not to be rude to the people I actually like at this center, but I think my point was received. So back to the leggings. Instead of letting myself feel like I must play every opportunity just to be a part of it I deliberately spent exactly the cost of the tournament fee on new clothes (two pairs of leggings) and then went out for sushi with a friend. And THAT is why these leggings represent choice and freedom to me. I was there and made the decision to walk away...then looked into that NC tournament thinking what a kicker if I could actually make that work. However, space available flying is a virtual impossibility during spring break week so, sigh...

Before I leave this little rant behind, could I ask a favor? Could we PLEASE put a moratorium on twenty-somethings making dramatic proclamations about "retiring from tag"? I am so sick of the retirement drama llama!

That gets me to this past weekend. Yep, I was back playing tag at one of the other centers...with twenty-somethings who are NOT constantly announcing their retirement. Had a great time. Then at the start of the week an announcement from out of the Force center...in an effort to find new players they are starting a regularly scheduled SM5 night that plays at a reasonable hour and also another local tournament. Part of me wants to say "how gullible do I look?", but the other part of me wants to be optimistic, set aside my reasons for having left and go back to enjoying this form of tag. But I'll wait until half an hour before start time before I believe it. ;)