The final stop on my weekend journey was Laserforce at Jungle Rapids in Wilmington, NC and (spoiler alert) it ended with me taking first place in the tournament that evening! :) 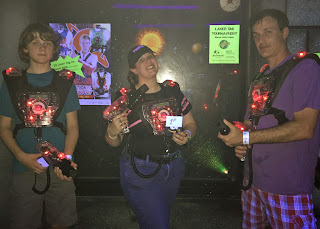 My time here started with some exploration of their site. When I arrived I explained that I was visiting from out of state and Donna at the front counter remembered me calling ahead a couple of weeks ago to book my spot in the tournament. She said "oh, you're the one who I spoke to from New York" and the entire staff really went above and beyond to make my visit pleasant. They honored my Laserforce membership card from Syracuse to get me the member pricing discounts on some tag rounds for practice. And Kyle was great to give me a tour of their new arena design, which was space themed and very cool. It's a single level space, but with platform turrets and ramps it has a bit of a second level feel to it. 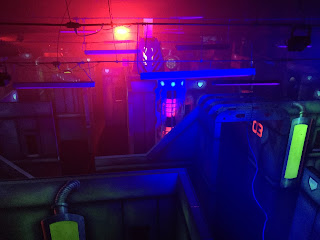 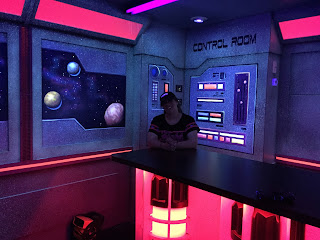 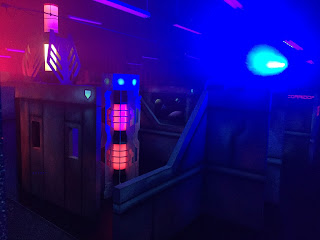 They run Gen 7 Laserforce packs (which were REALLY nice...although I was startled when my pack started playing music out of nowhere during the games). Now, although my home site runs Gen 6 I have played with Gen 7 before and the bases I had seen looked like the shield on the vest and the same as back home so I wasn't quite sure what to make of these bases... 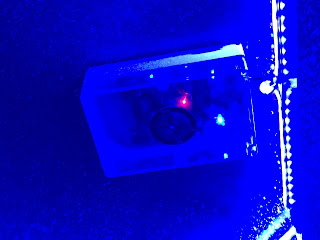 So I sent Beanz a pic and he informed me they were Gen 6 base housings, so aesthetically just a bit different than what I have seen in other arenas. This was interesting, as was the temperamental warbot. 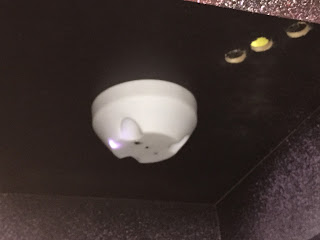 This was my first time playing with a warbot. There was also a tablet beacon over by the blue base. 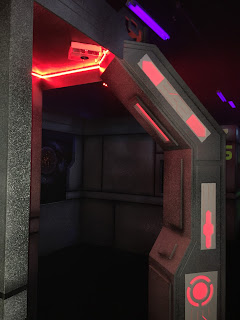 So I played five games for practice with the public groups that came through. I left for a delicious seafood dinner at Hieronymus restaurant where the waitress and I chatted about what brought me to town. She thought what I was doing was really cool and she wished me luck. Then it was back to Jungle Rapids for the evening tournament. 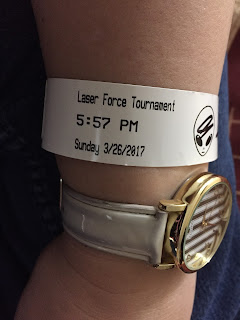 This was a very well organized tournament. Kudos to G.B. and the staff. From checking in member card numbers in advance to placement updates each round they really ran things very smoothly. 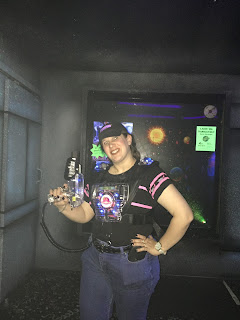 The tournament was solo play in each of four formats, highest total score determining the winner. The formats were Supercharge (which I was the most confident about), Shadows (which I have never played before), Dead Aim (which I think I played once before, but as a sniper thought I'd do ok) and Highlander (ugh! I'm terrible at missiling).

Supercharge was first. I went in playing aggressively. There were at least two other previous tournament winners in this event along with some practiced members (which now includes me...I purchased a new membership for this site). I took first in this round. 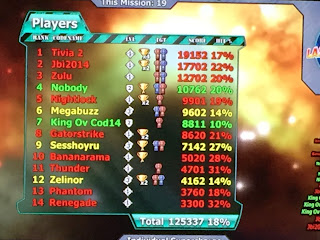 Next up was the Shadows game that was completely new to me. By this point I had been announced as the first round winner so I know some other players were really coming after me. I ended this time in second place. 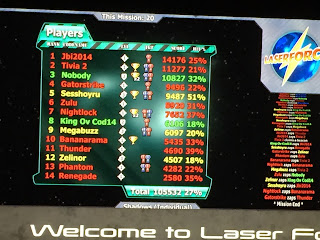 After round two we took a break and G.B. tallied the scores. Numerically I was in second place by 1449 at the halfway mark.

The third game was Dead Aim. Although I had only a minimum of experience with this game format I feel I play best as a sniper so I felt ok going into this round, although I momentarily forgot about the limited shots and went after the base and beacon and realized I needed to play more conservatively than usual. This round went in my favor. 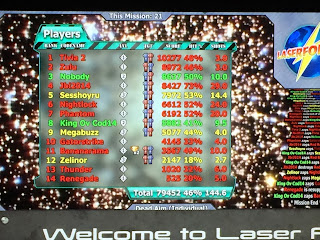 However, even with this win I crunched the numbers and I was still in second place by about 134 points. This was before going into the final format, Highlander, which I know is not my strong suit. I'm not great with missiling in games and I can't recall ever winning at Highlander in the past...but that was until now. With the tournament hinging on it I focused my attention on simply staying alive. I kept myself tucked away in one corner to protect my back sensor as much as possible. I took the nearest base, but didn't even try to cross the field to the other one. I simply took shots and counted down time. Although I did get off two missiles that eliminated a couple of players  and in the end those were enough points to push the game my way. I couldn't believe I won at Highlander! 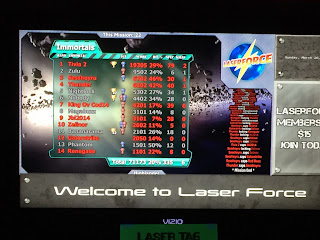 And I really was astounded that this was the result that put me in first place for the tournament. I congratulate Bryan (a former tournament winner) who came in second place and Jason who came in third place for their really competitive performance along with all the other players who were involved. 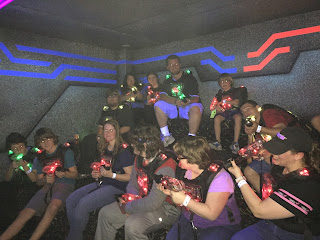 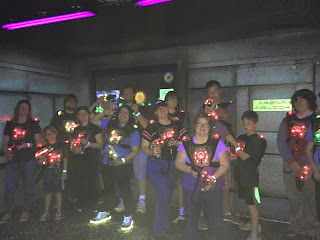 And thanks to Jungle Rapids for my prize of an Amazon gift card. 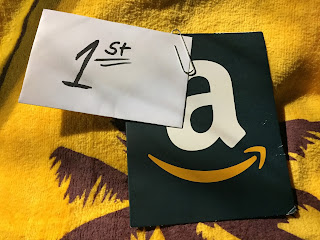 This was a great way to end my trip and I'm glad to be returning home with lots of memories of the southern states and all the laser tag arenas I was lucky enough to visit. 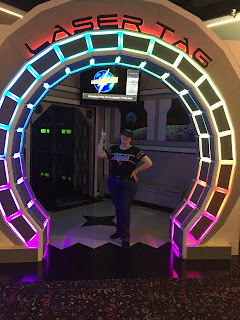